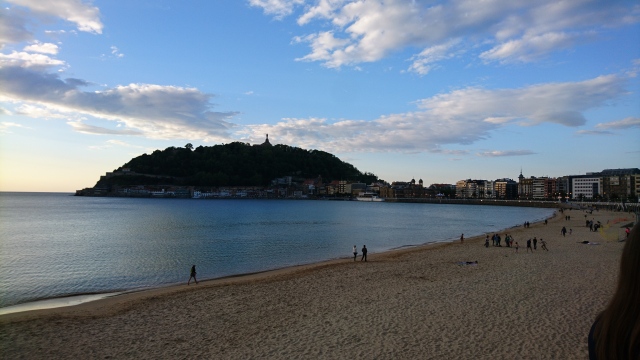 Day 1 – To San Sebastián via Bilbao

This trip should be a little different, by Sunday there will be 9 of us barrelling through the old town of San Sebastián. A quiet trip is not to be expected.

Pre-flight, Aer Lingus are doing their best to get you to not bring your bag onto the plane. We get our bags tagged for the hold and just take off the tag on the jet bridge before boarding, perfect. All bags secured in the overheads, Bilbao bound. The flight is short; we’ve landed within two hours and have to sprint to make the bus to San Sebastián. Just about jumping on as the bus starts to pull away. It’s an hour wait for the next one so….. Phew.

The journey offers up some stunning views of an impressively green rolling landscape. The hills around San Sebastián are beautiful. Upon arrival we find out that this city has two names; Donastia (which is really nice to say) being the Basque title. Lisa and Roberto have arranged our accommodation, which is very interestingly decorated. Like a bachelor pad from the 70s. Complete with Austin Powers style giant round bed like footstool. After throwing our bags, literally, into our rooms with head out for what’s really important…the food and The Parte Vieja (Old Town). First up is Paco Buenos, and the most terrifyingly delicious tempura prawns imaginable. At €1.70 for two you can’t go far wrong. Accompanied by a small beer; of course! You can’t move for the pintxos places in the old town. The bars being adorned by little portions of heaven. The tradition of throwing your napkins, cocktail sticks and prawn tails on the floor is interested. I’ll have a napkin stuck to the sole of my boot for the next three days! 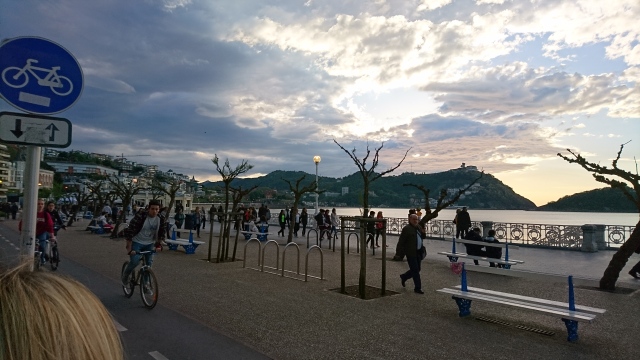 We do a sort of pub crawl but of pintxos bars, taking in Bartolo, Bar Aralar Taberna and Taberna Gandarias Jatetxea. The food is sensational, everything. Not once do we eat something and regret it. In Taberna Gandarias Jatetxea they have, possibly, the greatest piece of steak most of us have ever tried. Bite sized chunks on a piece of bread you can’t get enough of. The sublime is followed by the comical as Paul and I get the smallest beers I’ve ever seen. We sit for a drink in a square somewhere and Orla attempts to remind everyone of Back to the Future by pointing at a clock on one of the buildings while singing ‘don’t need money….that’s the power of love’. Nobody gets the cryptic clue. It’s a quick descent into terrible drunkenness then. Even though it was fully predicted, it doesn’t make it any easier. Around 3am we stumble home. Bambi mode initiated. 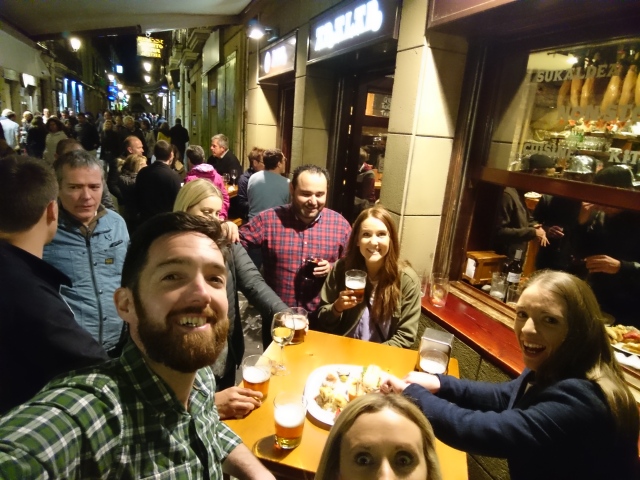 Waking up slightly groggy after maybe one or two beers last night. I find the crisps in the fruit bowl, everything in order so. It’s a slow start to the day, Paul and Gillian don’t quite make the early start (2pm), despite Roberto shouting up to them from the street below their hotel room. Amazingly he is heard, but Paul just thinks someone is calling him in a dream so ignores it. We’re all the better for getting up and going, especially when we get our tempura prawns for breakfast. What a world. Our breakfast/lunch adventure continues when we are introduced to morcilla by Roberto. A kind of black pudding, served on a little slice of bread with a fried quail egg on top. Not too shabby. There’s an incredible array of food in every pintxo bar. Iberico ham hangs from the ceiling with a triangular tub catching the dripping fat. We treat ourselves to some random bites in several places for our first meal of the day. Breakfast takes about 2 hours, but somehow only costs about €15. With beers, coffees and pastries on the way home.

Unfortunately it’s pissing rain, but wandering between pintxos bars you can’t go too far wrong. San Sebastián is busy, although nothing compared to Saturday night. It’s a bank holiday weekend in Spain so the crowds are to be expected I guess. We pick up a few pastries, Lisa doing the negotiations, and some coffee for a quick caffeine fix before our siesta.

About two hours later, Neil arrives from Madrid. He’s just been subjected to a 4 and a half hour ride share with a Spanish couple, a small lady occupying the front and most spacious seat along with the driver. Five adults in a small car for nearly five hours. He’s going to be walking the northern Camino for the next 35 odd days so he needs some fuelling up. Tapas, and tons of them, should do it. 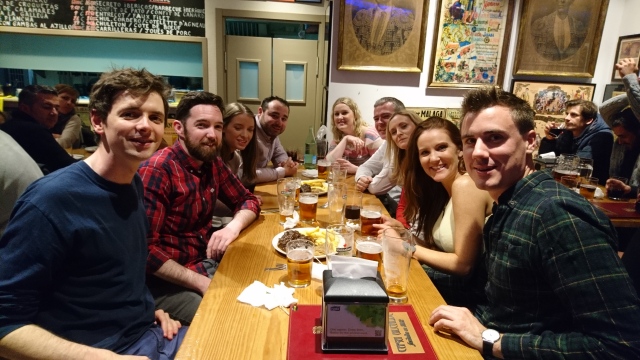 We stay in Casa Alcalde for most of the night tasting various delicacies including the tenderest steak in an amazing sauce. We spend a few minutes sitting outside in Trinitate Plaza before it gets real cold. We can’t cope so we make it an early night at 12:30am. 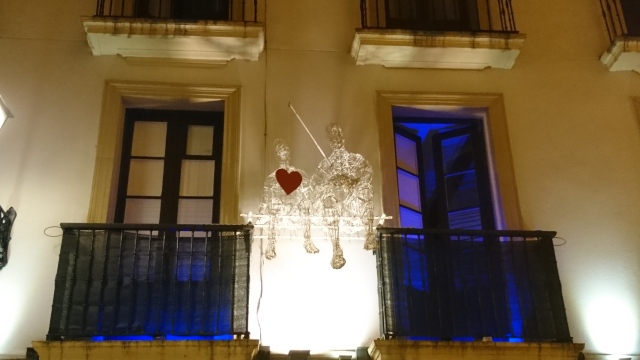 We wander to the old town for a coffee and croissant before our hike up Mount Urgull, which we don’t do in the end….instead walking the coast around San Sebastián watching the massive waves crashing against the rocks. After a beautiful walk, we feel we deserve some more pintxos. Definitely the most unusual thing I’ve had so far is a baby squid croquette. It doesn’t look appetising but it is delicious. Roberto has been immense organising basically everything and everyone. All the chaos of the pintxos bars is instantly alleviated by his ability to effortlessly converse. Without a Spaniard, it could take us days to settle into the ordering process.

San Sebastián is a pretty clean city, considering everyone just throws their rubbish on the ground in and around the pintxos bars. The beaches with their golden sands and spectacular views are the perfect place to swim, kayak or surf and the former is exactly what Neil, Paul and I have in mind next. A lovely refreshing swim is precisely what’s needed. The waves are crazy; diving under them you’re thrown into a spin cycle. It’s incredibly refreshing though, made more so after our 10 Km walk around the city earlier. Refreshed we decide to tackle Urgull. We eventually find the steps and hike up to the statue of Christ and the castle walls of the Castillo de la Mota. We get some great views back down to Playa de la Concha, where we braved the waves earlier, and across to the mountains which frame San Sebastián. It truly is a stunning place. Unfortunately, Paco Bueno is closed when we get back down so we can’t get any prawns, which is truly disappointing. We’ll have to wait probably another hour or so until we get some! 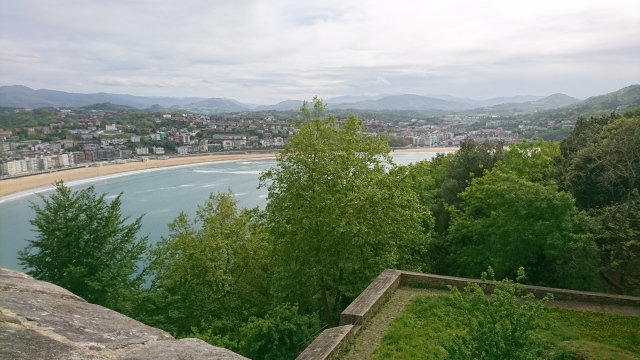 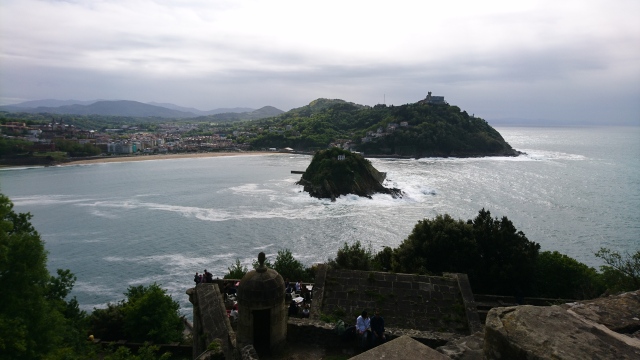 Eventually we make our way back to an open Paco Bueno where I try to order two beers in Spanish, ‘dos cerveza, por favor’ but my Spanish is so bad the guy has to confirm what I’m attempting to order in his perfect English, frustratingly. We move on quickly to Taberna Gandarias Jatetxea; the miniature pieces of steak being, probably, the best thing we’ve had. Washed down with a wonderful mushroom risotto, you know, the normal combo. It’s hard not to just constantly talk about food. Everything is so good, it’s just impossible to ignore how much a part of being away food is, and here food is possibly the main reason to be here. Unsurprisingly, despite all our experience the night descends again into madness. I get hit on by a guy who is 100% convinced I’m Basque…..it takes Paul to intervene and divert him away. We end day three in the Hollywood Disco Pub after Orla and Fionnuala clean out a random vending machine near our apartment. Sitting drinking one last beer, nibbling on Tuc, Milka, jellies and crisps in the dodgiest bar around. 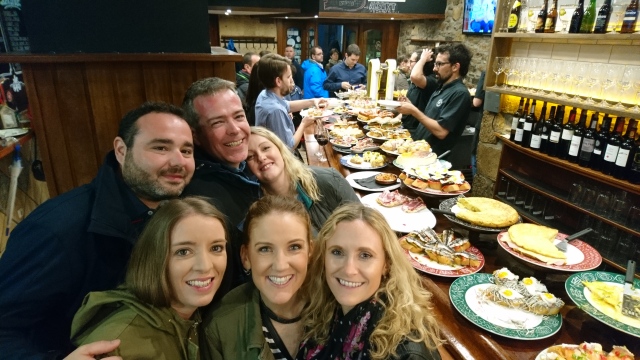 It’s lashing rain again, but that didn’t stop us on Sunday and it won’t today! Gillian and Paul recommended Haritza for breakfast, and they nailed it. Shame to find this on our last day, but sure look. En route to the bus station we go for a spot of shopping where I follow Roberto around a massive fresh produce market where we get some chorizo and morcilla to bring home. The place is packed with fruits, vegetables, all kinds of sausages, cheeses as well as having Iberico and various other hams hanging everywhere. There’s an almost overwhelming amount going on and I’m sort of just in the way. There’s some ham going for €138 per 100g. The animal being raised on a farm, fed only nuts and produce from that small farm, we’re told. Then aged and cured for a long time, specifically I couldn’t determine. Proper attention and care. Kind of like whiskey, but with ham. 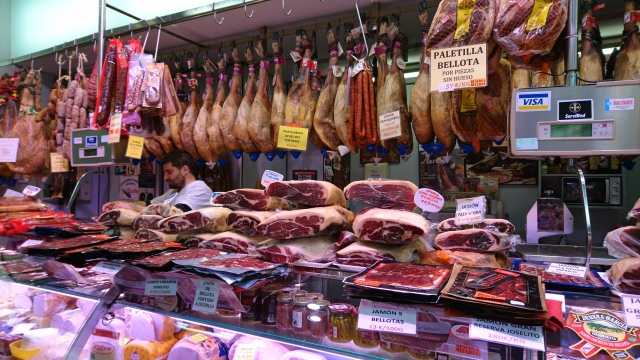 Meat securely packed away, we get the bus back to Bilbao Airport where we walk all the way to the gate, start to queue and then are told that we’ve just strolled past the passport checking kiosk. We have to walk all the way back up to queue again to get our passports checked. Aer Lingus then start taking the piss. They attempt to tag everyone’s bags to have them put in the hold. It’s totally ridiculous. We’re about 6th in line to board. The only reason there wouldn’t be space is if the staff have loaded the overheads with chorizo and Iberico hams. We just do the same again, and rip off the tags between the gate and the plane door. Simple. We’re getting real good at this travel lark. 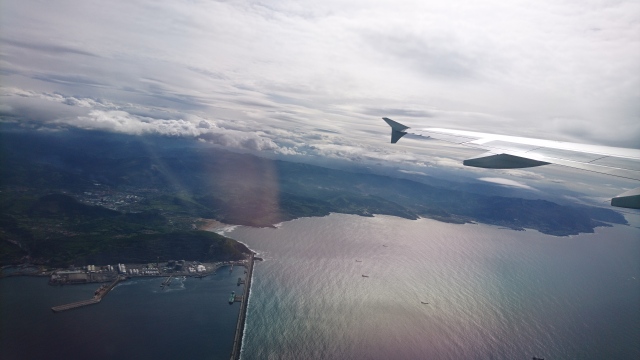