It’s nice to have the wedding of Heike & Paddy (Orla’s sister-in-law and brother) at the end of our trip to Switzerland. Sort of a long weekend break at the end of a week long holiday. Some life I suppose.

Checking the directions to the hotel from the airport in Zurich while waiting on our flight, I have us taking a couple of trains, a bus and walking for 20 mins to get there. Total travel time; 1 hour 58 minutes. After our flight. Just in the nick of time, we realise that’s to Munich……right, there’s more than one Hotel Cristal, first lesson over.

We get a nice little chocolate for flying Swiss. So, the flight is short but sweet. Less than an hour later we’re in Hotel Cristal, I’m being introduced to twenty people at the same time….struggling with names already. The receptionist is delightful. You’d swear we’d just walked into her kitchen off the street and helped ourselves to the fridge. Surly is an understatement.

It’s been a long day, leaving Luzern at 8am; by the time we get to Nuremberg and check in we’re famished. Fried noodles with chicken and vegetables from Quick Wok; Orla and I ordering different things but getting the same. Easier all round I suppose. It’s accompanied by a glass bottle of diet coke in which the straw we’re given doesn’t reach even half way down the bottle. Resulting in us losing it after drinking about half. Perfect. It’s then onwards for some negotiations at the local hair salon before picking up some beers and water for the room.

Barfüsser is booked for everyone who’s in and we’re treated to some blonde beer and bratwürst. The 5ltr kegs make for interesting pouring situations, followed by 2ltr bottles. Similar difficulties. The beer is very good though. After more beers than I care to remember, we get the tab. €20 each; including food. Incredible value. 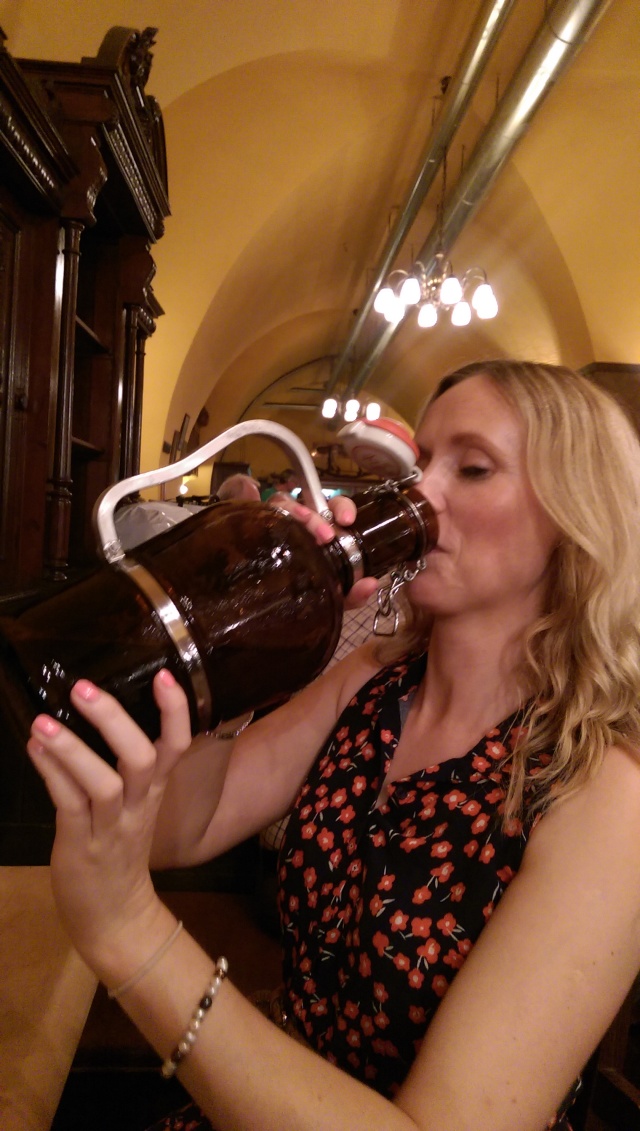 Next up is a stop off at Finnegan’s for the obligatory Irish pint. Terrible stuff. The bartender doesn’t even attempt to defend their product, suggesting better beer is available from the supermarkets here. It ends up being a far later cessation than hoped for, or anticipated.

Final prep for the wedding gets underway early. My prep is having breakfast in the hotel, and then wandering around Nuremberg aimlessly for a few hours. I have a quick assessment of the Castle. Not bad now. There are plenty of markets kicking off in various squares of the old town. The streets gradually get busier as the sun ducks in and out from the clouds. I’m hoping the temperature stays low today, given that I’ll be wearing a full suit later. I spend several minutes figuring out some features of the camera on my phone while taking a few snaps of some cathedrals. I’ve only had the phone two years! 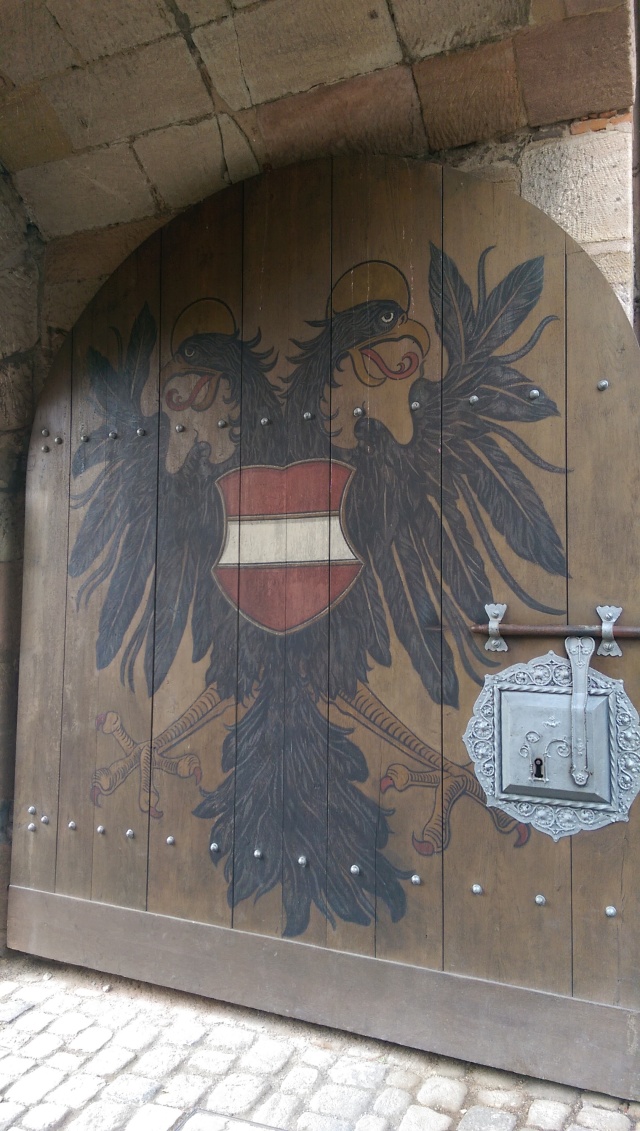 Glancing at my watch, it’s time to get the U-Bahn back to the hotel to throw the suit on and catch the bus to Heike & Paddy’s Wedding ceremony. They’re already actually married, since last year. The ceremony is followed by the Christening of Liam; Heike & Paddy’s son. Orla being sworn in as Godmother, with Liam attempting to grab the flame atop his Christening candle only being narrowly avoided by some last minute, congregation prompted, reactions from Orla.

After the ceremony, which is in German and English thankfully, there’s the traditional and wonderful Kaffe und Kuchen in the garden of Parks. Homemade cakes, coffee, beer and a lot of laughs. The rain threatens but never really arrives. We try out a few German beers, not necessarily by choice but due to communication breakdowns and laziness. Bilingual speeches are introduced by Heike’s brother Lother; it must be difficult for him, sort of caught in the middle of two languages. He is brilliant though and links the whole affair very well.

The day ends, or begins again, drinking whiskey with Paddy, Lother & Morris at 5am in the hotel bar. Fup sake.

After a very late night, the morning is slow to get going. A thorough search is required to find somewhere open on a Sunday for an early afternoon breakfast. We settle for pizza.

Just about managing to motivate ourselves for day three of the festivities, eventually making it to Wiesn Biergarten. Beer and BBQ in a park in Wöhrder Wiese. The sun has really come out today. It’s a beautiful setting, and with most things closed on Sunday, what else could you be doing! Orla and I are a little wiser this evening and are back in bed before midnight. Others, maybe not so much.

The last day of the holidays. Everyone is feeling the weekend at this stage. Tired, sore and very emotional. We’re accompanied by Patrick and Matthew (Orla’s cousins) for a stroll around the castle for a while and then get coffee in Wanderer on Mittelfranken. We walk some of the river and bridges as the temperature rises. The weather is amazing. Paddy (Orla’s brother) brings us on a bit of a walking tour of Nuremberg, passing through some nice squares, before we have to catch our train back to Frankfurt. Nuremberg has some unusual fountains. Dark portrayals of some unknown (to us) past events. At some point we gather supplies for the journey ahead. We’re facing a two and a half hour train journey before our flight to Dublin. I don’t envy the Mayo crew who have to drive from Nuremberg to Frankfurt and then from Dublin to Mayo on the other side. Serious stuff.

The heat on the train is dangerous. The air-conditioning is out in our section and it must be 40 degrees in the cabin. No air. We have to move about to the other cabins to cool down. Just the old shrug of the shoulders from the staff when we mention it. Not good enough really for the €55 a ticket. Add to that, Frankfurt airport could make things a little clearer upon arrival. It’s like a treasure hunt at times, trying to find the direction to gates and terminals. We are finding things in general difficult today though. The holiday ends with Orla, Patrick, Matthew and I slowly running out of energy like old portable cassette players. 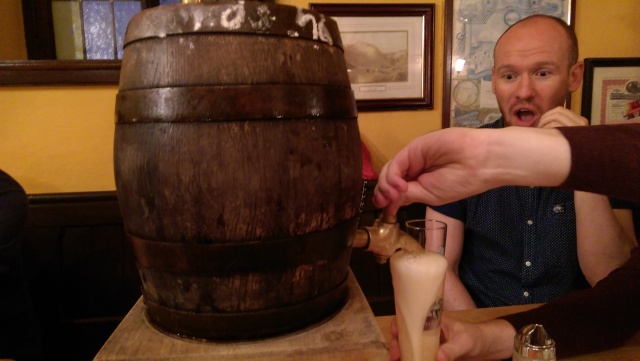 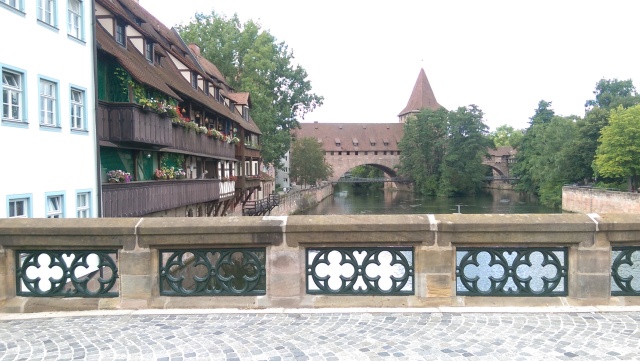