It’s a snowy start to Friday morning. A quick look at Dublin Airport departures shows a high percentage of delays. It’s not looking good for us getting out on time, our plane has to get to Berlin and back before we get on it, but sure we live in hope. After an unannounced gate change, and a little bit of a dash, we’re only about 40 minutes behind schedule. Berlin bound for round two.

There’s a shout out, just after we board, to a Dave, who is home from Australia for a couple of weeks. Ryanair doing shout-outs now. The whole plane finds the funny side before a confused apology from the attendant. We then narrowly avoid an international incident at 30,000 and something feet when Jenn basically stabs the male flight attendants ass attempting to pass a fork to Marc across the aisle.

This will be Jenn & Marc’s first time in Berlin, and Jenn’s first time in Germany. We have John and Lena on the ground to show us what’s what and Orla and I have been here before, so things should go along with the standard German efficiency.

With our feet barely on the ground, we walk briskly to the train station assuming we’ll only just make the S9 if we hurry, but end up standing on the platform for 15 minutes. Half an hour later and we’re getting a big hug from John before taking the U-Bahn to our hotel which probably takes longer than walking from the S-Bahn stop but it’s cold out so fuck it.

John takes us to Santa Maria East Side, on Krossener Street, for a pre-dinner apéritif. The Berliner Pilsner is ok, but it is nice and cold. John says they have amazing tequila, but there’s not a chance I’m going there. We sit with a shrine to Freda at our backs, on tiered seating. Multi-level drinking. Across the road is Papaya for dinner. Thai food and a Hefeweizen beer. An interesting combination. We start with some fresh spring rolls and I end with a chicken Naman Hoi for mains. It’s good, but we’ve definitely had better Thai food. The price is fantastic though. It’s funny; you forget how much John can talk! Such a great guy, but it’s hard to get a word in…..’No input, only output’ according to himself. Jenn heads home and we get a couple more beers in some bar nearby that has a non-smoking policy. Dachkammer I think. There’s a lot of talk about a kebab, but it never happens, unfortunately.

We stroll home through East Berlin’s quiet streets, John giving us a quick history lesson about how the apartments were built as quick and as cheap as possible. Not long after we get in there’s a late night WhatsApp image from John, showing him cooking about 12 sausages for his supper. No bread; he’s on low-carb recently needing to take a sick day from work on his first day of the diet. I’m tempted to call back over to his but fall straight asleep instead.

Kicking off Saturday with a fairly crappy cup of coffee in our room. Already I’m regretting not getting that kebab last night. Given my history, it would probably have been waiting for me on the table inside the door this morning. We won’t make it much longer or further without food.

We stroll to Szimpla for a Hungarian breakfast. Spicy sausage, various cheeses, aubergine chutney and breads. Fucking delicious. We’re going to do a lot of walking today, so we need to pack in the calories. With that in mind I finish Ora’s brie along with most of what she wasn’t able for before helping myself to some of Jenn’s leftover waffles. I’m now stuffed, tired and guilty. 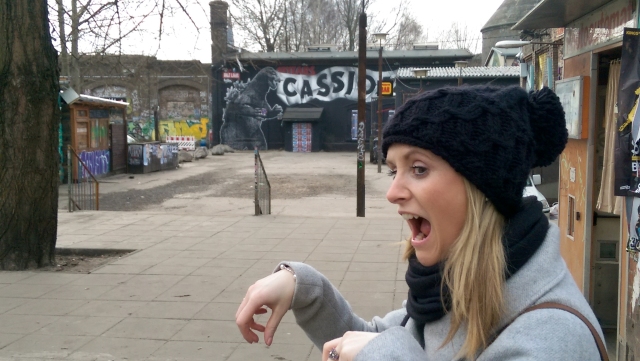 John shows us plenty of cool wall murals in and around the East Side Gallery. Many of the buildings have been freshly painted since my last visit, hiding some interesting street art which once adorned their walls. Our tour guide offers up some insight into the Berlin mind-set and how new money is changing the way Berlin works, in particular East Berlin. You can see how companies are attempting to feed off the popularity of street art, with advertising masqueraded as graffiti. Murals painted by famous street artists proving everything is for sale.

We take a ride on the U- Bahn to Alexanderplatz and then on to the Brandenburg gate. A brief rest is required at the Balzac Cafe, for a pretzel with cream cheese and chive. Interesting. Taking stock and sourcing Wi-Fi for half an hour. We engage in only the most important conversations based mostly around non-sense, while we bop to the groovy tunes which resemble elevator music for coffee shops.

On our way to the Brandenburg Gate, we stop at the Jewish Memorial. It doesn’t really speak to me. Maybe it’s not supposed to, I don’t know, it just doesn’t seem to have much of an effect on me. Nearby we have to pay €1 to use the public toilet. The price of a kaffe in many places here. The tourist trap is everywhere. 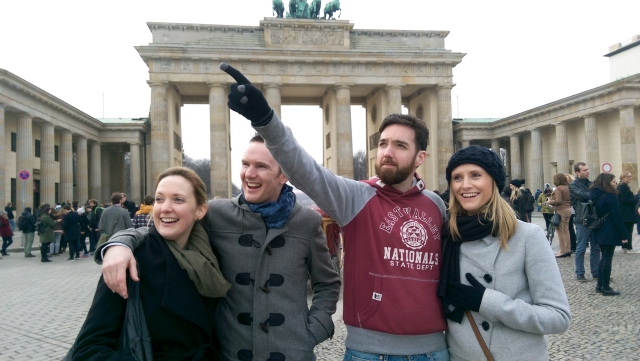 Many lags start to become tired and it’s time to head back for a nap, taking it the surrounds of Alexanderplatz and a spot of scarf shopping for Marc before a currywurst at Curry Sixty Six. One pork and one beef. Lunch at 16:30. Hangry people all round. We maul the sausage when they arrive.

According to the receptionist at the Best Western, there are no ‘nice’ bars near the hotel so we get a couple of Berliner Pilsners and sit in the lobby. It’s growing on me. Orla, Marc and I set the world to rights once more, developing fool-proof ideas for how the world should work. None of which any of us can remember later. So, job done.

John has a table at Schlesisch Blau, in Kreuzberg, booked for dinner. A set menu is all that’s available. The food should be good so, as the chef probably created the menu and therefore should nail the food. There are maybe two or three options for the main course. Self-serve soup, three pots sitting on a stove in the restaurant, very homely. The food is good overall, I’m not sure about the salad, but my pork was tasty as hell. We skipped the rabbit course, and by the time I’d finished Jenn’s baked Aubergine, I was beginning to wish we hadn’t. A Hofbräuhaus beer later, and my eyelids are starting to close. We skip the hard-core techno club. 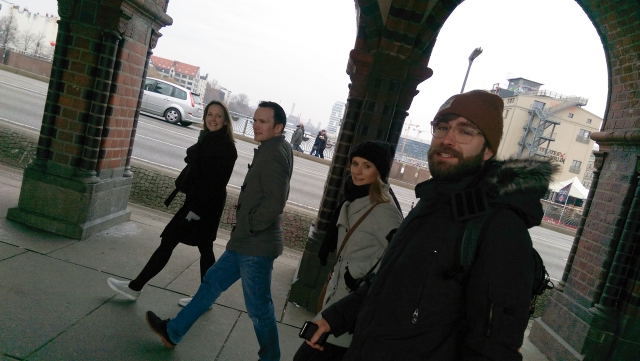 For only the second Sunday I’ve ever been in Berlin, it’s raining, again. So, I can logically assume it rains every Sunday in Berlin. That single pair of Pumas I brought is looking like a great decision now. We commence the, ‘what time is check-out’ conversation over WhatsApp before waiting until that time to leave the hotel. Must. Use. Every. Minute. After check-out, we hide from the rain and reminisce about the weekend over a coffee. I have about twice the recommended daily allowance of sugar in my streuselschnecke. It’s probably meant for three or more people as it’s basically the size of a side plate. Pupils dilated we move on.

John offers us the option of brunch, or an amazing burger. There was only ever going to be one winner. BurgerAMT is on the corner of Boxhagener Platz. With old school hip-hop on the tune box, videos of break dancing on a pull down screen and music and film posters plastered everywhere; it’s trying real hard to be cool. It probably just about pulls it off. A lot of that hinged on a great big dirty, delicious, Mediterranean kefta burger. A chunk of beef, covered with courgette, rocket, mozzarella, pesto and aioli. It’s a messy affair, and I fall completely silent while I work. The massive side of sweet potato fries Orla and I share are only made even tastier by the various dips in the centre of the table. It’s pretty obvious we’ve made a deliciously correct decision.

In said platz, there’s a Flea market with all sorts for sale. Vinyl, jewellery and tiny tiny tea sets, one of which Lena purchases. Prices are high though, a Lego Millennium Falcon for €105. We get a couple of cool prints by Mateo Dineen before chilling out in John and Lena’s for an hour waiting to catch the S-Bahn back to Schönefeld from Frankfurter Allee, after some serious difficulty using the ticket machines. Two machines out of order, but only when you reach the payment screen, having just spent a couple of minutes selecting tickets. We barely make it having originally had 10 minutes to spare.

In Schönefeld, they get everyone to stand in a puddle of Vodka while they scan our boarding passes and check our passports. Then we stand for half an hour in a crowded, hot room with no toilets and only a few seats. A wonderful way to end a nice weekend. Airports I guess?!? 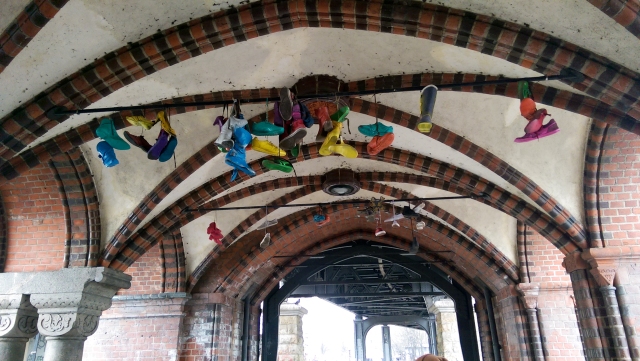 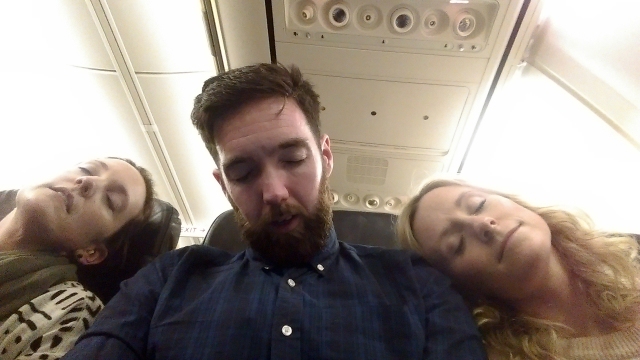